AS A teaching artist: 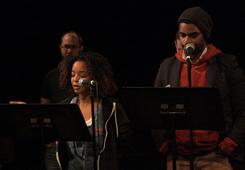 AS A PERFORMER & DIRECTOR:

A snippet of "Not Alone" from Spongebob the Musical at Westchester Sandbox Theatre (Costume Design, 2021)

I directed the original musical She Said, for "Zero to Fierce" Festival (2018)

Me singing one of my favorites from Next To Normal.​ ​Produced by Brian Strelko, 2017 ​(Warning: explicit language)